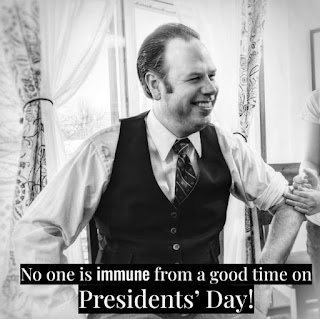 Our 38th President, Gerald Ford, happens to be our only president who was never elected to either the position of President and Vice President. That isn't the only thing that makes him, and the photo I emulated this year, complicated.

One of Gerald Ford's first actions as president was pardoning his successor, Richard Nixon. Ford became president upon Richard Nixon's resignation. The country was deeply divided with many wanting to see Nixon punished for his role in the Watergate break-in. Announcing the pardon, Ford said, "[The Nixon Family's situation] is an American tragedy in which we all have played a part. It could go on and on and on, or someone must write the end to it. I have concluded that only I can do that, and if I can, I must." Today it is impossible to know whether his decision allowed our country to move on or if it sowed seeds that contributed to the great division we feel today. 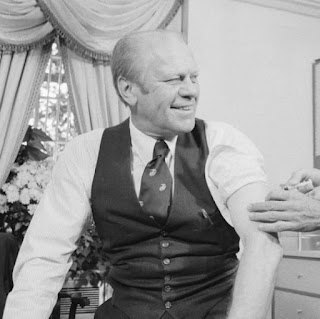 When I first saw this photo of Gerald Ford receiving the swine flu vaccine on October 14,1976, I knew it was the only photo I could do when Presidents' Day 2021 fell on the day of my vaccine appointment for COVID-19. However, the story behind this photo is not one of medical triumph. After a young soldier at Fort Dix died of swine flu in February, Ford called for a national swine flu immunization program. The rush to deliver a vaccine resulted in some vaccine doses containing the wrong viral strain. The feared pandemic never materialized and many people feared the vaccine was responsible for dozens vaccine recipients contracting Guillain-Barré syndrome. The vaccine program ended after nearly a quarter of the U.S. population (including President Ford) received the shot. However, the damage to the credibility of vaccines was long lasting, and still affects us.

"When the U.S. Government Tried to Fast-Track a Flu Vaccine" by Christopher Klein is a worthwhile read if you want to learn more.

Although he is often remembered as the "accidental president" since he never publicly aspired to that office, he is also remembered as a man of integrity. After leaving the White House, he put aside his differences with Jimmy Carter, who beat him in the 1976 election, and the two eventually became close friends.
In learning about Gerald Ford this year, I was struck by the parallels between some of the challenges of his presidency and the problems we face today. It is those connections that have made history endlessly fascinating to me. I hope that you will work to find the connections between history and the present as well. When it comes to President Ford, a good start is his address to the nation upon pardoning former President Nixon.

Posted by Jim Windisch at 4:32 PM No comments: