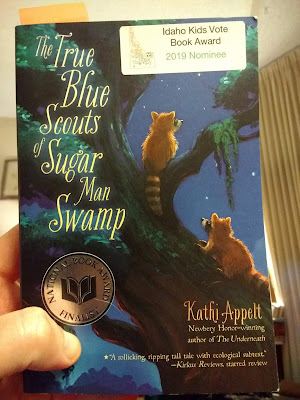 This was one of the 2019 Idaho Kids Vote Book Award nominees I had not read before this year's program began. When I started reading, I thought the Deep South setting was an unusual choice for our state book award. Wouldn't Idaho kids relate to a book about life in the mountains better? Even though we don't have bayous, our wilderness faces threats, too. I think the unfamiliar setting gives readers in Idaho just enough distance to consider the message of finding harmony with nature. Not only will that message stick with me, I think the laugh out loud moments and touching relationships in the book will have me remembering the residents of the Sugar Man Swamp for years to come.
Posted by Jim Windisch at 4:11 PM