Next week, my elementary school will fall to the wrecking ball. Not the one I teach at now, but the one I attended.

I'm so happy to see how our community is supporting our schools: voters passed a bond that will replace my elementary school and remodel four other schools that were in desperate need, including the one I currently teach at.

The current staff at Winton held an all-school reunion, so I had one last chance to walk the halls. I even got a hug from my second grade teacher in the room where I learned from her almost 30 years ago. I also added my memories of the school to a time capsule that future students will get to explore to learn their school's history. 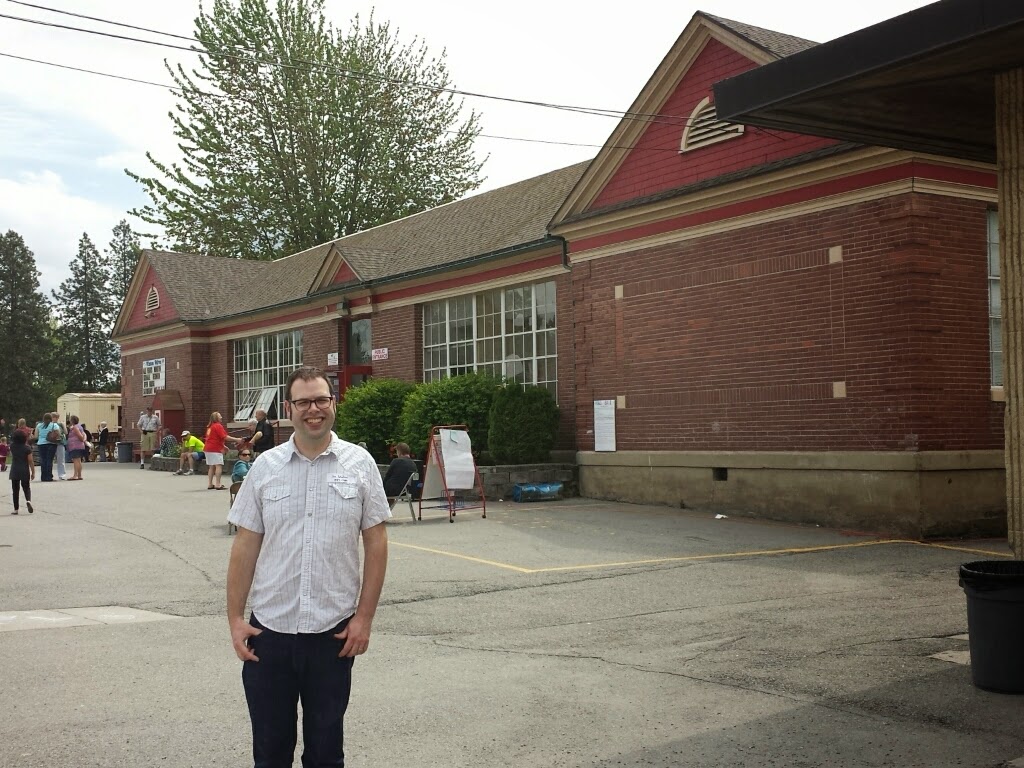 I attended Winton Elementary from 1984-1989 for first through fifth grade.  At that time, Winton students were known as the Winton Warriors.  Our mascot was a knight with a pencil for a lance.

Winton had the best playground of any school in town.  The west end had giant tractor tires that I liked to climb and hide inside of.  Next to those, there was a zip line that always attracted a long line during recess. The furthest northwest corner had a dirt slope where we would dig out “garages” and build ramps for racing toy cars.  There were swings, teeter-totters, and the large field to the east, but the very best part of the playground was the large play structure in the middle.  It was a huge wooden U with different levels to run around on and two wide metal slides.  In the center was a net made out of tires.  We would play “toilet tag” on the net.  The person who was it would try to reach though the tires to tag kids playing on the net.  Anyone who was tagged would join ‘it’ under the net.  If someone touched one of the posts at the corner of the net, it “flushed” the toilets and everyone who was ‘it’ had to run around the entire play structure before re-joining the game.

Some of my other favorite memories of Winton included the first grade Easter hat contest, the annual science fair, the monthly “Perfect Peanut” assembly to honor students of the month, field day, and Friday ice cream sales.

When I was in fifth grade, the ceiling over my classroom became weak and was in danger of falling.  For the last month of school, all of the fourth and fifth grade classrooms had to be evacuated in order to make repairs.  The fifth graders had class in the gym, and fourth grade classes were moved to Borah Elementary School.  I’m sure all of those changes at the end of the school year were tough on our teachers, but I remember thinking that moving our desks down the hall to the gym was a lot of fun!

I’m sad to see my old elementary school go away, but I am excited for the fun and traditions that will be created with a new Winton Elementary.  I will definitely keep an eye on all of the great things that happen there!

As I look at my memories, I'm reminded how wonderful student-generated play is. I'm certain that toilet tag was student created, student taught, and student regulated. Just imagine reporting "he's cheating at toilet tag" to a teacher. It would probably get the game shut down. I hope that my students have secret recess games and activities that bring them joy.


Also, I am amazed that my fifth grade teacher survived moving class into the gym! I know there were well over 30 students in my fifth grade class. I have a hard enough time keeping my fifth graders focused for their last two or three weeks of elementary school even when we're in our regular classroom.

I love that Winton's new building will contain elements of the old one. Still, I'll miss having the old building around: it held so many memories for me.
Posted by Jim Windisch at 5:22 PM

Email ThisBlogThis!Share to TwitterShare to FacebookShare to Pinterest
Labels: reflection